Skip to content
Date: May 3, 2017Author: The Arcane Nibbler 0 Comments

I always smirk when people say they like their movies to be realistic. What they usually mean is they don’t like obvious artifice. They prefer the Classic American Style (though they may not even know what it is) where the story is king and the filmmaking is straightforward. This is funny to me because I know there’s no such thing as a realistic movie. All movies are fantasy. Life is not two-dimensional. It doesn’t exist within a finite plane. It doesn’t play itself out in carefully edited images designed for maximum dramatic impact while defying established rules of temporal physics. And it doesn’t resolve itself within a two-hour time frame. But beyond the inherent artifices of the art form, movies, and the stories they tell, always exist in a reality apart from the lives of its viewers. It doesn’t matter if it’s the romantic fairy tale world of an arrogant prince transformed by a judgement-bearing witch into a frightening beast, or the visceral “real-life” world of early 20th century explorers in the treacherous Amazonian jungle, the best movies transport us into the lives of other people, people whose lives are generally way more interesting than our own. In this regard, all movies are fantasy whether they present themselves a fairy tale or a real-life adventure.

James Gray’s, The Lost City of Z, which tells the “true” story of Percy Fawcett, the above-mentioned explorer, is no less a fantasy than Disney’s live-action Beauty and the Beast. Though Beauty, is an extravagant, family-friendly musical fantasy set in a fairy tale French kingdom and loaded to the gills with CGI eye-candy and colorful production design, and The Lost City of Z, contrarily, is a somber, gritty, often unglamorous adventure, replete with violent images of death, disease and cannibalism, both films are, ultimately, based on fanciful concepts. And they are both ideological myths. One, ironically the fairy-tale, doesn’t work. Beauty and the Beast is clunky and soulless, oblivious to its mythic roots and uninterested in its truths. Its story is perfunctory. Its primary concern is musical razzle and dazzle. It imitates the magical but never becomes it. Gray’s brutal adventure, on the other hand, embraces its mythic identity, becoming, ultimately, ethereal and in its own way, enchanting.

Beauty espouses the old-fashioned ideology that good girls love bad boys and that a sinner can be redeemed through repentance. The ideology of Z, is not a traditional Christian one, but that of the spiritually-leaning modern liberal. Gray’s Percy (Charlie Hunnam) is a contemporary sort of fellow. A British soldier with an undistinguished military record and an “unfortunate choice of ancestry”, he’s hired by The Royal Geographical Society to chart the nebulous boundaries between Bolivia and Brazil, a Journey fraught with perils and a high probability of no return. While doing so, he discovers evidence of an extinct but sophisticated culture, a ”lost city of Z”, he believes once existed in the jungle. Establishing the city’s existence, he insists, to the scorn of his colleagues, will prove that the disparaged jungle natives are more sophisticated than Percy’s overconfident, racist peers are willing to admit. Intent on proving his theory, he returns to the jungle with the approval of his concerned but ever “independent” wife Nina (Sienna Miller), who despite her modernity is willing to stay home and raise their family while Percy is off for years at a time risking life and limb in the jungle.

The real Percy Fawcett was, of course, no PC liberal and his wife was no modern feminist archetype. He was, by most accounts, a run-of-the-mill, white European racist who believed his lost city would prove that the white man once existed in and dominated a jungle now overrun by dark-skinned savages. Nor was Nina, Gloria Steinham in a corset. In the 21st century, the Fawcett’s story has been politically corrected, but not just to make it more palatable to modern audiences. It’s now the framework for an ideological world view. A view in which all cultures are created equal, but in which the ruling white society is bloated, arrogant, lazy and dull. A post climate-change view that embraces nature-centric religions prohibited by previous Christian mythologies. In other words, the hip, idealized world-view of the educated modern liberal.

But Z isn’t just empty propaganda. It sells its PC fantasy with storytelling mastery, transcending the preachy and entering the realm of mystery. Like all mythologies and religions, it reinforces the belief system of the culture in which it arises. It’s the perfect myth for our modern liberal world.

If Beauty and the Beast attempts to sell its mythology through excess, The Lost City of Z ‘s approach is low-key from the beginning.  Its early scenes have a stately, stodgy feel to them. The cold dark military sets and scholarly buildings are photographed in seemingly perpetual absence of direct sunlight, perhaps, to remind us of the close-minded nature of overconfident academia and the military. But even when we get to the sunlit jungle and a treacherous journey down the river, things are turned down. The brightly-colored travel cinematography of typical Hollywood jungle adventure movies, gives way here to subdued, yellowish hues.

In a series of jolting and terrifying scenes, the brutal reality of jungle life quickly sets the story into a more visceral mode, but again with little fanfare. These things happen with a matter-of-factness that is disturbing and utterly gripping. Gray’s confidence in the strength of his story and the virtues of his characters, leaves little need for flash. Z captures the ominous isolation of the jungle and its unexpected terrors like no other film before. There is the constant threat of native wildlife, the sudden surge of deadly arrows from unseen natives, the never-ending oppression of the heat. And there are the constant reminders of disease – a pesky sore on the mouth, a nasty bout of black vomit. Yet there are scenes of spontaneous charm and unexpected beauty peppered through the film. An operatic performance stumbled upon in depths of the jungle, a palm reading in a WWI foxhole, and the film’s hypnotic, ambiguous ending. These scenes bring the harsh world of Percy’s life and into a more spiritual light. Percy isn’t just looking for a lost city. He’s looking for the Golden Fleece and the Holy Grail. The lost city is a metaphor for heaven. 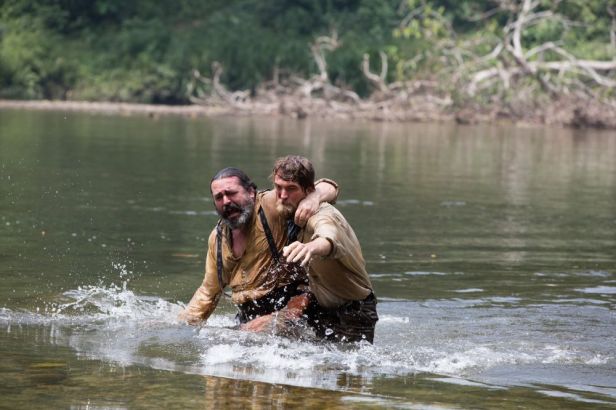 Gray’s screenplay, based on the 2009 novel, The Lost City of Z: A Tale of Deadly Obsession in the Amazon, by David Grann, establishes a classic Campbellian, monomythical scenario. The hero is called to a quest, a journey to a magical world of unknown mysteries and revealed truths. He accepts the challenge and sets on a series of trials and ultimately enlightenment. He returns to his world with his knowledge but is rejected. He leaves the world again and transcends into a higher state of consciousness. In The Lost City of Z, the jungle represents that world of magic and the film’s three visits there are the core around which the film, and Percy’s spiritual quests, are centered.

The film’s production is thoroughly first-rate. The stunning cinematography, by Oscar nominee Darius Khondji (Evita, Midnight in Paris), moves effortlessly from the mundane, to the harsh, to the mystical. And Christopher Spelman’s score, nearly absent in the film’s first half, helps bring the film’s more thoughtful second half to deeper terrain without being sensational or obtrusive. It’s lovely and understated. As Percy, Charlie Hunnam is perfectly cast. He’s the classic, Americanized modern hero, likeable and compelling, wise and compassionate, arrogant, but obsessed with a dream and determined to make it real. And the rest of the cast is likewise solid, including Miller, an unrecognizable Robert Pattinson as Percy’s co-explorer, Henry Costin, and Tom Holland as Percy’s son, Jack. But it’s Gray’s vision that finally ties Z’s qualities, visceral and spiritual, literal and mythic into a coherent, satisfying whole.

The film’s very deliberate pace will no-doubt alienate some viewers. (There were walkouts at my showing.) And those unwilling to accept its ideology will be less likely to surrender to the experience. But for the willing, The Lost City of Z, unlike the empty Disney epic, pulls you in to its own romantic fancies with such straightforward story-telling and warm-hearted sincerity, you can’t help but become lost, like Percy in his jungle, in its alternate reality. And that, after all is the true magic of cinema.